Is Marcus Stroman a top 10 Pitcher in the American League?

So, yes, Marcus is sub 6 feet tall. And he doesn't remind anyone of your prototypical power pitcher.  But he has the nastiest stuff in the American League.  Everything he throws moves, either to the left or to the right, up and down.  His record is 7-2 currently, ERA of 3.07 with 2 complete games. 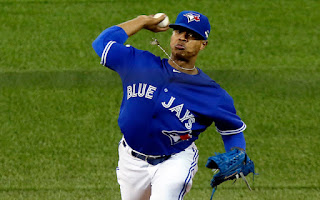 He also gives his team a chance to win every night.  People usually make a lot of being a big game pitcher.  Jack Morris was measured more for his ability to win the big game, more than his actual numbers.   That said, it was usually Jack telling everyone that fact, but given his 10 inning 1 hitter against Braves in the World Series.  He probably knows what he is talking about.    Stroman in his young career has been a very big game pitcher, 2 playoff runs for the Blue Jays and a Gold Medal game win for Team USA.  Being named MVP of the WBC says everything about his performance.

Do I think Stroman is up there with Sale, Keuchel, Darvish? No, but I think he is right there with the rest of the bunch.  Who would you rather have pitching a big game, David Price or Marcus?  Yes, that's a pretty simple question.  Most young pitchers don't have quite the pedigree for playoff games that Stroman has in such a short period.  Stroman maturity is growing, he no longer gets excited about umpires and his celebrations are more tempered.   He is definitely a big game pitcher.   Since returning to the rotation in 2015, Stroman has been a stalwart for the Blue Jays rotation.

If you haven't seen Marcus pitch from behind home plate, you are missing out.  I encourage everyone to pay the extra couple loonies and see a game from behind home plate.  You won't be how much movement he has on his pitches.  His slider absolutely explodes and his fastball is electric.  Stroman might not have the history to be called a top 10 pitcher just yet.  If I had to win 1 game, he would be in that top 10.  Gotta love the Stro Show!