Devon Travis Hurt Again - is he too fragile?

Blue Jays second baseman has been a fan favorite ever since he arrived in 2015 from the Detroit Tigers.  As Anthony Gose is now being converted to a Pitcher, SOURCE - the Jays clearly won that trade.  Travis has been a plus offensive player for the Blue Jays, his defense has been improving.  This most recent injury is troubling.  Not will he come back, but is Devon a player than can play everyday player in the major leagues.  Having the fortitude and resiliency to handle the playing a tough position like 2nd base.  Devon is never going to be Lou Whitaker or Bobby Grich, but he should be able to have a few 140 game seasons for Toronto.  Hitting over .300 and 12+ homers and 70+ rbi.   That said, management should get that season and trade him right effing then.  His value is only going to be reduced over the next couple years.  Any additional injury will diminish his value. 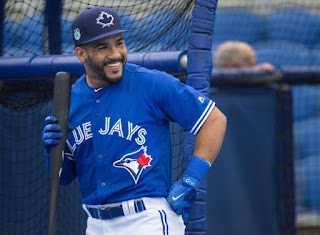 How much do the Jays lose without Devon Travis?

Ryan Goins is a top 5 infield defender in baseball.  His range and arm strength make it tough to get anything past him at second or shortstop.  His recent time filling in for Tulo at Short has given him a lot more confidence than most bench players have at this stage of the season.  He has more power than people expect.

Darwin Barney is also a great defender and has hit much better than most Jay fans thought the former gold glover was going to produce.  His hitting has improved and he is no longer the easy out he was in Chicago, earlier in his career.  And yes, he won a Gold Glove for second base in the National League.

Running the righty/lefty game with Barney and Goins is as close to replacing Travis as one could hope for, when considering how special a hitter Devon Travis is to replace.  Defence is better with Goins or Barney but Travis is a game changer with the Bat.

Judgement - Travis is going to be a an injury concern for most of his career.
Posted by Sports Guys at 8:02 PM