Just when you thought the Blue Jays were going to take a break for the holidays, BAM! Double A comes up with a little Christmas cheer for all of us. Dickey, a knuckle baller that has only recently become a star in his late 30's, should give the Jays a few more years of elite performance. Robert Allen Dickey came out with a tell all book about how he was molested as a child, his success has been inspite of all the issues faced as a child. Dickey, will give the Jays a completely different look than the rest of the rotation. Knuckle Ballers are their bread, not thought of as lefties or righties, many switch hitters often hit from their best side and not worry about lefty/righty advantages. Dickey also throws a very hard knuckle ball, not like the old days of the floating Niekro ball. Dickey was also a traditional pitcher from much of his career and spots an 85-87 mile per hour fastball, not usually the repertoire for a knuckle ball pitcher.
Posted by Sports Guys at 2:03 PM No comments:

Double A was on the Fan590 to settle all the rumor talk that JP Arencibia may be moved to pull in another pitcher. Travis D'Arnaud is still considered the top prospect in the system, but will need time to recover from knee surgery. He will most likely start the season at Buffalo(New Triple A Team). John Buck has been told he will be the backup catcher this year and should play in about 40-50 games. Buck has excellent power but his average has been on the steady decline over the last few years. The vote of confidence was needed after Arencibia had been the focus of many rumors on Twitter. Given the recent acquisitions, one should feel confident that the Jays are going to need a stable backstop. JP has improved drastically behind the plate in the last two years plus. Breaking in a rookie catcher is not the way to build a winner. And as we all know, this team is built to win.
Posted by Sports Guys at 2:58 PM No comments:

Carlos Villanueva - Should he be a starter?

The Blue Jays have some unanswered questions, do they bring back Carlos V or is he just a luxury insurance policy. Carlos proved that he can't handle the big innings.
Posted by Sports Guys at 6:10 AM No comments:

Blue Jays use which glove maker

As you may know the Blue Jays use several different glove makers, the glove is the discretion of the individual. Glove makers try and sign up deals with lots of players to gain exposure. Most Toronto fans will remember Roger Clemens using a Cooper Glove for his years in Toronto with a sense of pride. Cooper is not a traditional maker of Baseball Gloves, at least not in the likes of Rawlings Baseball Gloves or Mizuno. Cooper signed Clemens to an endorsement deal. Endorsement deals are usually only for well known players or pitchers that get enough face time for it to matter. Jose Bautista uses a Wilson Outfield Glove Brett Lawrie - Mizuno; Adam Lind - Wilson; JP Arencibia uses an All Star, that's the name of the maker. Newly acquired Melky Cabrera also uses Wilson. Jose Reyes uses a Rawlings, while the other newly acquired John Buck uses a Wilson 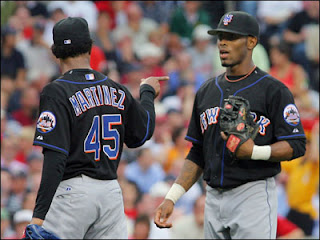 Just remember that you should not pick their because their favorite player uses it. Here is a great site for tips on picking your glove.
Posted by Sports Guys at 2:31 PM No comments:

Labels: Blue Jays equipment, Players use which give

I think a lot of Blue Jay Fans didn't realize that the Jays traded the guy they got for John Farrell. Mike Aviles and Yan Gomes were sent to Cleveland in exchange for very hard throwing right hander Esmil Rogers. Rogers throws in the high 90's and will be a grea backend complement for Casey Jansen, Darren Oliver and the rest of the Bullpen. Rogers a fastball clocked at 95+ and a devastating splitter. The video will give you a good look at this guy and the stuff he features. I think we gave up a couple marginal players that were not going to contribute to the 2013 Blue Jays and received a plus arm. Rogers has spent most of his time with the Colorado Rockies. Rogers had an ERA of 3.06 in 2012 after coming over from the Rockies.

Mike McDade plucked from the Jays by Indians.

Mike McDade was an interesting pick up for the Indians, he has been with the Jay s since 2007. Check out this article on this pick up by the Indians.  He was an All Star at a couple levels.  Players like McDade are often lost as a result of years of service and the Blue Jays not protecting him.
Here is a little video of what Mike McDade looks like swinging the bat. This video is from the 2011 Double A All Star Game.

Posted by Sports Guys at 8:00 PM No comments: